The Hold Steady Live in Memphis at Hi Tone 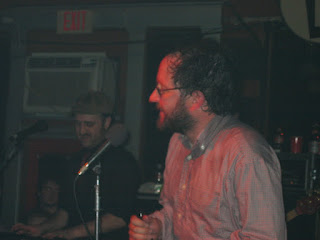 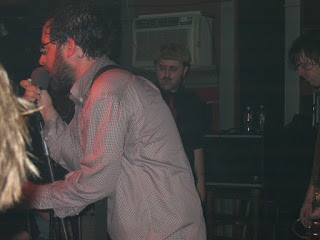 Opening Band: The Thermals
The Thermals sold me. One of my next purchases will undoubtedly be The Body, The Blood, The Machine.

The Hold Steady:
The Hold Steady brings more energy than other show I have seen. Aside from playing every song I wanted to hear, these guys just flat out put on a show. Craig Finn's is the happiest entertainer out there and works the crowd like no other. The entire show the band danced yelled and basically rocked out. In addition, the crowd was phenomenal; everyone was bouncing up and down with the accompanying fist pump. Crowd participation during "Massive Nights" and "Chips Ahoy" was oustanding. Franz Nicolay, keyboardist, is absolutely hilarious. His black suit with a red tie with a hanky in the pocket along with his curly mustache, sideburns, and constant grin all amount to a spectacle. He danced, bounced and whaled on the harmonica all while alternating a straw from his mouth to his ear. In between songs, Franz took gigantic swigs of Ravenswood red wine. Pretty hilarious. I posted a video of "You Can Make Him Like You," and half of "First Night"

The Setlist is as follows: 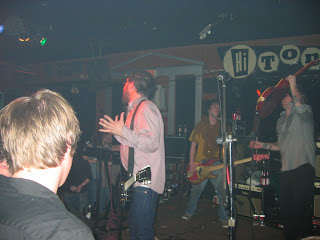 
Half of "First Night"

Are you currently trying to find valid YouTube subscribers? Put aside your headaches, we shall diligently direct you to buy youtube subs