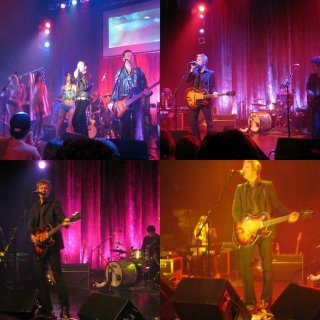 Super Diamond is on the top left picture. Spoon is in the remaining ones.


The Venue:
As always the New Daisy Theater was perfect. The place was decorated with Sin City theme which was obviously done by Spoon's agent or record company. All in all it was pretty funny though. They had pole dancers and casino tables everywhere with a Las Vegas backdrop. I think it was sponsored by Camel cigarettes.

The Opening band:
The opening band was hilarious: A Neil Diamond Coverband called Super Diamond. Many of us were singing along to all of the cheesy favorites such as: Coming To America, Love on the Rocks, Girl, You'll be a Woman Soon, Sweet Caroline. One cool part was at the end of Sweet Caroline they broke into "Sweet Child O' Mine." and sang the lyrics to Sweet Caroline. All in all they were amazing.

Spoon:
Spoon satisfied every need I had. They played every single song I wanted to hear. Off of
Girls Can Tell they played
"Me and the Bean,"
"Beleiving is art,"
"Lines in the Suit,"
"The Fitted Shirt" and
for encore my favorite "Anything You Want." and possibly others.
Gimme Fiction:
They started of with "The Beast and Dragon, adored," others they played on
"Sister Jack,"
"I Summon You,"
"Two Sides of Monsieur Valentine,"
"I Turn My Camera On" and
my favorite "Mathematical Mind" which they absolutely rocked out.
On Kill the Moonlight, they played,
"The Way We Get By."
"Two Stakes"
"Jonathon Fisk" among others.

We decided that "Indie" kids are not very cool. They are too afraid to have fun at concerts. I miss the hippie crowd in my hippie phase. My friends and I were probably some of the oldest there and probably dancing the most. Indie kids just stare at the band.....More on this later with the Death Cab in Nashville review. 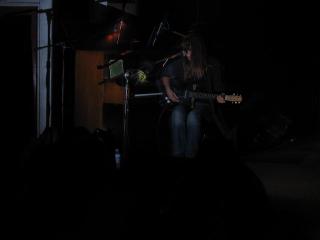 Last Wednesday, I ventured up to Memphis for a concert. Cat Power was playing. I recommend never going to see her live. First of all, only one blue light shined upon her. You could barely see her. Then, she asked lighting guy to turn off that one “bright light” that was shining on her. The light was like a small blue flashlight and was the only means of seeing anything on stage. Cat Power live is entirely too slow. She was by herself and while her voice is amazing, I found myself bored. She alternated from guitar to piano. Then, the losers in the back kept being loud, and she started singing about how much of a boring bitch she was. Strange. After her sobfest, she started hammering on the keys, and then ran off the stage never to return. Don't get me wrong, she is an amazing musician. Her music is beautiful but a terrible live show. She has major social anxiety issues which is fine. But, come on, you are a musician. If you are that much of a freak, don’t tour. Someone please tell me why power is in her name. Excuse the dark picture for obvious reasons it was not my fault.

I Turn My Daisy On. 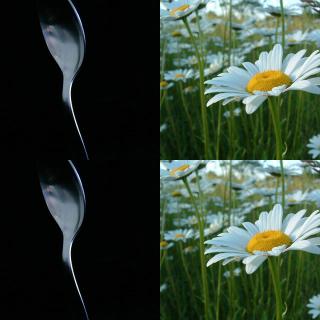 Spoon is playing at New Daisy in Memphis, TN on Wednesday. Who knew? I will be there. Stay tuned for pics and a review.

Shake Your Rattlesnake Skin and Become a Part of Society

Clap Your Hands and Say Yeah! is still by far the cd of the year so far. Sorry for the repetition, but it is just too good not to re-emphasize. Go buy it if you don't have it. 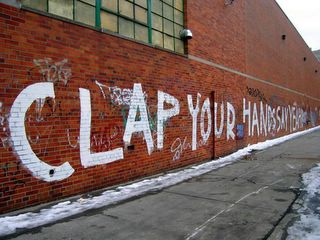 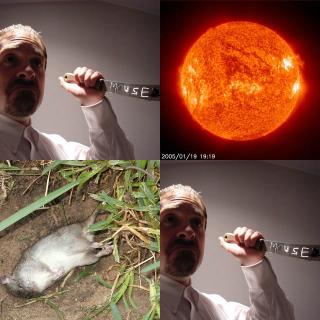 On November 1, Sun Kil Moon’s Mark Kozelek will release an album of Modest Mouse covers. Kozelek claims he went and saw them and was blown away. During their last tour, they would randomly play modest mouse covers and finally he decided why not make an album. WOW! Modest Mouse with no lisp!!! (please don’t kill me Isaac).
01 Exit Does Not Exist
02 Tiny Cities Made of Ashes
03 Neverending Math Equation
04 Space Travel Is Boring
05 Dramamine
06 Jesus Christ Was an Only Child
07 Four Fingered Fisherman
08 Grey Ice Water
09 Convenient Parking
10 Trucker's Atlas
11 Ocean Breathes Salty

I don’t mean to go on a rant or anything but, the evening started out as a bust.  As we pulled up to the Mercy Lounge, I thought we had arrived at Bonnaroo.  Doors were supposed to open at 8:00, and we arrived at 9:00.  In a sea of indie haircuts and tight vintage shirts, a line existed literally about 700 yards long.  I could not believe it.  I also noticed a many Michigan and Illinois T’shirts.  I went and asked the security guard who told me there was only two people checking ID’s.  Anyway, we stood in line for about 45 minutes and did not really move.  I decided something had to be done.  So, I conveniently eased into the front of the line like I knew what I was doing.  Then, I proceeded to get on the phone and act like I was giving directions so my five other companions who were “on their way to the venue.” 30 minutes later we entered the venue.  However, there was only one person checking ID’s for a venue that holds over 1000.  As we entered Wally World, excuse me Mercy Lounge, we find the place about a quarter full.  PS it is about 10:30 at this point.  Then, we skipped merrily up to the bar only to find that they could not sell alcohol for lack of security guards (shocker).  However, we were informed that we could go upstairs and drink but could not bring them downstairs.  We proceeded upstairs and pounded shots of tequila and whiskey.  I eased downstairs and found that the problem was a tranny (no kidding a man dressed like a woman) was the ABC officer who was in charge of this debacle.  Anyway, they finally figured out the deal, and they could serve.  The venue is nice but has many pylons throughout the place that obstruct your view.  The place is also very level so Napoleonic people are very discriminated against.  This is just my opinion I could be wrong. Enough pessimism.  On to Sufjan.  Sufjan came out dressed in stars and stripes with a Cubs hat, and his band had pom-poms and headbands dressed to a T as cheerleaders.  Wow, an eight piece band full of guitars, women, drums, a trumpet, a banjo, and a xylophone.  He really put on a show. He began the concert with his 50 states song which can be heard at INSERT HERE.  Then, he went into Illinoise full force. Songs ranged from Decatur, Come and Feel the Illinoise, Chicago, Casimir Pulaski Day, Jacksonville, Man of Steel, ETC ETC.  He did not play UFO or John Wayne Gacy, Jr, but oh well it was amazing.  One funny part of the night was someone who kept yelling Lord God Bird (the song he did for NPR) and some guy yelled out, “Way to Be That Guy!”  Everyone got a good laugh.  Other highlights of the night was Sufjan doing a cheer before each song.  They all would do a cheer about the particular song.  Sufjan could barely keep a straight face while doing them.  All in all it was an amazing show. I would highly recommend anyone seeing him.  He truly made it sound like the album with all the instruments and voices.  I never thought he could pull it off.
Posted by Clyde at 11:22 PM 2 comments: 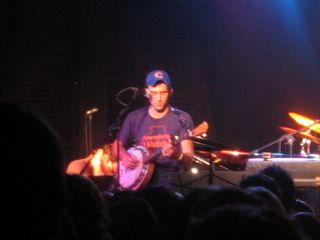 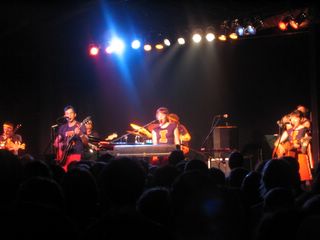 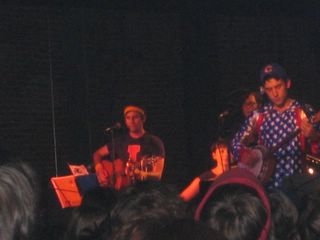 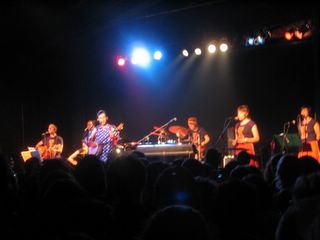 Wow. First of all what a lineup! The Ryman Auditorium is an old church turned into a concert venue. The Ryman has great acoustics and does not have a bad seat in the house. We sat in the balcony, which I highly recommend. My only negative experience was the beer lines. Jeez lou EEze it took at while to get a beer. However, they had 32 ounce beers so not many trips were required. We got there a little late missing part of the Helio Sequence. But, I will say that they were very good. Who knew it is only two people in the band? Anyway, soon after they finished the Secret Machines graced us with their presence. I only have the cd Now Here is Nowhere, but they played many off of that album. They basically rocked. They were all dressed in white and flashed many white lights on the stage. Great scene. The last song they played First Wave Intact was amazing. It lasted like 8 minutes, but the crowd did not want it to end. Towards the end the lights were absolutely amazing because they were blasting with the guitars. But all things must come to an end, and by that time we were ready for KOL. As the Kings walked out on the stage, I could do nothing but laugh. Not that I am a fan of the sagging, baggy, Girbaud’s (Ja-Bows – for whoever was in a cave in the 80’s), but they came out with basically leggings. Thankfully, I was not too close to because my girlfriend would have probably left me, and I would have been disgusted. Tight is an understatement. Oh well, they still filled the rock star role. They began with Molly Chambers and ended with Slow Night, So Long. KOL were amazing. They rocked loud and hard. The crowd was very into it as well, with everyone singing and dancing. The only negative things I have to say is they only played like an hour and a half. I know all of their songs are short but come on. Also they did not play Joe’s Head or Talihini Sky which are two of my favorites. Re-Memo, Tranny, and Soft were highlights. Anyway, I would highly recommend the venue and the bands. Here are the setlists
Secret Machines Set listNow Here is NowhereSad and LonelyPharaoh's DaughterDaddy's in the DoldrumsLightning Blue EyesHarmoniaDe Luxe (Immer Wieder)I Hate PretendingGirl From North CountryChainsThe Road Leads to Where It's LedFirst Wave Intact Kings of Leon Set listMolly's ChambersTaper Jean GirlPistol of FireWasted Time RazzBucketSoftMilkRememo4 KicksVelvet SnowKing of the RodeoWhere Nobody KnowsCalifornia WaitingSpiral StaircaseHappy AloneTraniHoly Roller NovocaineHead to ToeSlow Night, So Long
(image placeholder)(image placeholder)(image placeholder)
Posted by Clyde at 11:07 PM No comments: 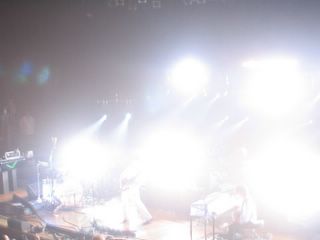 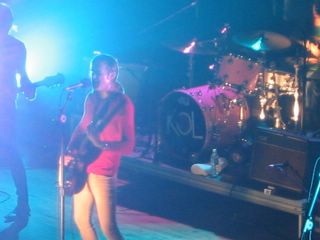 Kings of Leon Live in Nashville 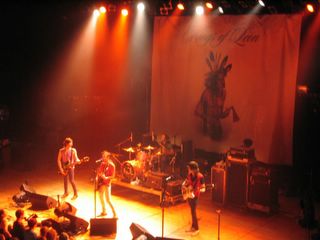