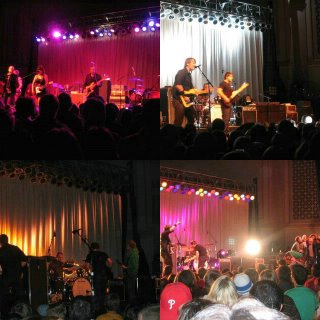 Stars in Top Left. Death Cab in Others. Bottom Right is when Stars came out for Trans- atlantacism.

The Venue:
First of all War Memorial Auditorium was great. The sound was perfect and anywhere you were was a good spot. They had three bars set up, so no big lines. Also, we were probably the oldest people there. The place is like an old courthouse with huge columns in the front. Very nice place.
The Crowd:
I thought the crowd was going to be a let down. During Stars, they were dead. Nobody knew much of it. Most of the people were under 21(not that that is bad just weird). Indie kids are not very good fans. However, when Death Cab came out the crowd went crazy. They were very loud and singing.(probably because of the OC)

Stars:
I did not realize that Stars is a seven piece band. They sounded excellent. They played probably like the first 6 or seven off of Set Yourself on Fire. They also played some off of Heart. Afterwards, we met the band who were just hanging out in the side of the auditorium. They were very nice. All in all they put on an amazing show.

Death Cab For Cutie:
Death Cab exceeded my expectations ten folds. Luckily, this time Ben did not meat out about politics and what not. They played many songs off Plans but failed to play my favorite song: “Your Heart is an Empty Room.” Oh well. Transatlantacism made up for it. Stars came out and sang, “Come On” at the end. It was amazing.