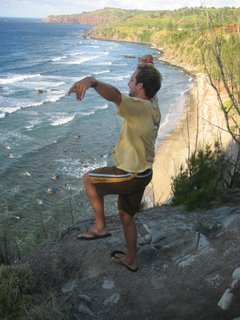 Here is Beck covering "Do You Realize?" and "Creep" and "Debra" at Bonnaroo this year.
Click Here to Download

Also, here is a better quality of Wilco on Conan playing "Is that the Thanks I Get?" Click Here to Download
Posted by Clyde at 5:26 PM No comments: 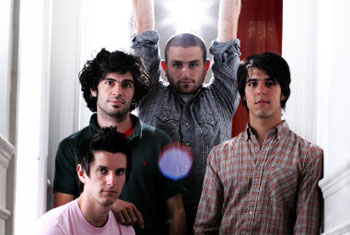 Birdmonster is a great new band you need to check out if you haven't. The best song you can download in "Best Songs of 2006" to the left <----- called "All the Holes in the Walls," but here are some other great songs they played on a recent radio show. If i had to describe them I would say a mixture between Modest Mouse and Fugazi minus the hardness of both. Great quality show too.

Oops, I fell on my own Pitchfork...Jeff Mangum Article was a Hoax 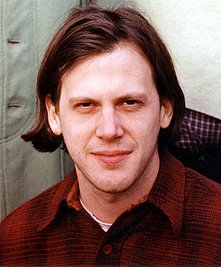 Jeff Mangum Story was a hoax. Good Job Pitchfork. I saw that yesterday on a blog who was skeptical about the article, and of course Pitchfork wanted to jump on it but sorry guys you are wrong. Taken from Brooklynvegan
"Updating a story first posted here (Billboard) yesterday (June 27), Neutral Milk Hotel principal Jeff Mangum has disavowed a Web posting attributed to him, which falsely referenced the progress on the reclusive artist's first new album since 1998's iconic 'In the Aeroplane Over the Sea.'

Longtime collaborator Robert Schneider, who fronts the Apples In Stereo, reached out to Mangum in an attempt to verify the posting, which was made on a Web site devoted to the Elephant 6 musical collective. Schneider then posted Mangum's reply on the site, which reads, 'I am sorry to inform you that this is not my post. Could you please inform the good people ... that this is not my writing?'" [Billboard]

In Pitchfork's defense, they seemed to get confirmation from a reliable source before posting. Most of all this is just funny, but sad. Next probable hoaxes: Radiohead says they're breaking up (thx Phil) & Pavement says they're getting back together.
Posted by Clyde at 6:08 PM No comments:

Here is a documentary from 1997. Isaac talks breifly about his lisp. Pretty cool. 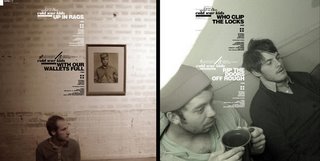 Cold War Kids rock. Check out these mp3's from them from a recent radio show. Good Sound Quality. I also included a bonus song from a live show.

Bonus: Hang Me Up to Dry
Posted by Clyde at 5:31 PM No comments:

New Postal Service in the Works....REEE


Back in 2003, when music was still in its infancy, Ben Gibbard and Jimmy Tamborello came together as the Postal Service to release a little record called Give Up, making it okay for indie kids to get down. And the world was never the same.

In years to come, Give Up will serve as an education in the entirety of music's history all by itself. That is, unless its follow-up improves upon it, in which case we can include it in the curriculum as well.

Gibbard has spoken of that ever-elusive follow-up in a recent interview on MTV.com, in which he said, "We're slowly starting. We're crawling right now, and whether that crawl turns into a walk remains to be seen. But we'll know more towards the end of the year. I've just been touring so much and trying to find time to make it happen and make our schedules line up."

Jimmy Tamborello echoed Gibbard's statement in a recent Pitchfork interview, saying, "We're talking about wanting to finish an album by sometime next year, because we have to work with Death Cab's schedule and stuff. I definitely want to do another one."

Tamborello also said he hopes Jenny Lewis will be more involved in the process this time around. The Rilo Kiley frontwoman and solo artist was a vocalist on Give Up, and, depending on her schedule, she might contribute as a songwriter on the upcoming record.

When asked about the direction the new album would take, Tamborello said, "I always have this idea to branch out and try something new, but at the same time, the Postal Service is a really nice outlet. It's so fun to do. Changing it too much or even overthinking it... I just don't want to make it a drag to work on."

According to MTV.com, only two songs have been recorded for the album, but writing and recording will take priority once Death Cab for Cutie's tour schedule winds down. However, Gibbard is "in the very early stages of writing a new Death Cab record, too," so maybe he'll never get around to the Postal Service album. C'mon, Ben, do it for the kids!

Gibbard explained his schedule to MTV thusly: "We're going to do one more lap around the country and then go home and work on music. At the end of the year is when this is all going to wrap up, and we can all get back to work."

As for how recording for the new project is being handled, the boys are still keeping it real-- long distance style-- but instead of the mail, they've taken to trading tracks via the internet. "[Since] this time we know how to do YouSendIt.com, doing stuff online is a lot easier now. So we probably won't be using the actual mail," Tamborello said. When asked if this might necessitate a name change for the group, he laughed and said, "Yeah, ‘YouSendIt-dot-com'."
Posted by Clyde at 5:11 PM No comments:

THE SHOW: My Morning Jacket at Bonnaroo 2006

I finally found "The Show" from Bonnaroo this past weekend for your downloading pleasure. My Morning Jacket + Andrew Bird + reedick covers + good sound quality = pure bliss. Here is a video from the show and the show available for download below.

Modest Mouse Postpones Tour to Finish record in Oxford; I Continue to Be a Stalker 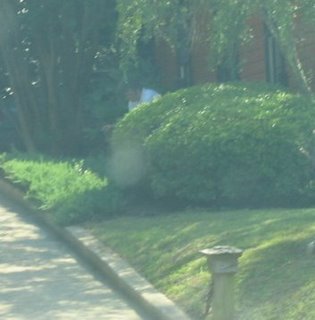 Isaac Brock smoking a cigarette outside of Sweet Tea.
I choked again. I walked right by Sweet Tea Sunday and Isaac, Johnny Marr, and the rest of them were all sitting outside just hanging out. My fiance and I were walking on the sidewalk right by the studio. Isaac was with a girl so I decided to not bother him. I basically stared them all down though like a kid at a toy store window. Just as I passed the studio, it started pouring down rain. I thought to myself, "If I would have talked to them, they might have invited me inside to shelter from the storm." Oh well. I didn't. Anyway, long story not so short this is from their website.
"MODEST MOUSE POSTPONES AUGUST TOURING"
"With Modest Mouse on a feverish pace to finish their new album, the decision was made to remain in the studio and postpone the upcoming August dates. The band is currently recording the album in Mississippi with producer Dennis Herring (Good News For People Who Love Bad News). The group sincerely apologizes for any inconvenience and is looking forward to finishing their new album and rescheduling the dates."
Posted by Clyde at 5:03 PM No comments: 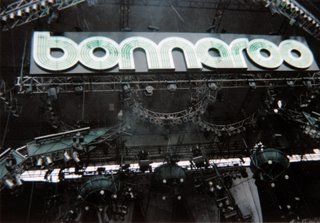 Many blogger went to Bonnaroo. Here are a few great reviews etc. I am working on getting the My Morning Jacket show from Bonnaroo that was apparently "THE SHOW" They played many covers and had Andrew Bird sit in for a set. etc.
YANP part 1 You ain't no Picasso part 2 Stereogum Stereogum part II and Cable and Tweed has a great one.
Posted by Clyde at 4:43 PM No comments: 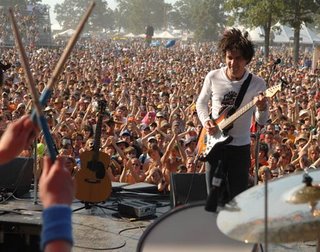 Photo courtesy of Bonnaroo.com
Here is the live show from Bonnaroo this past weekend from Bright Eyes.
Good Sound quality too.

The end of the internet (as WE know it) could be coming soon. Little blogs like this could be gone and destroyed by Corporate America. Congress is trying to pass a law that would treat the internet like Cable TV where not just anyone can have a website. Read the article over at Mocking Music.

I also posted the best of 2006 mp3's to download over on the left hand side of the blog. Download them, put them on a cd and be very happy.
Posted by Clyde at 2:34 PM No comments: 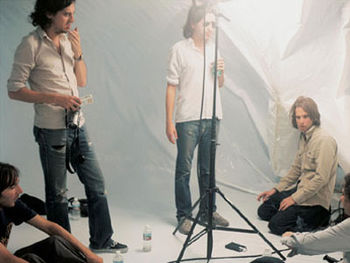 I finally got a chance to listen to Phoenix. I am now a huge fan. These Parisian guys have a little hint of the Shins. Pitchfork gave it a 8.0 and it was deemed as the esteemed "Best New Music" a few weeks ago. Their third album, It's Never Been Like That is a solid cd. My favorite song is "Long Distance Call" which starts out sounding like 2001 Space Odyssey then kicks into a poppy almost Spoon sounding beat. Here is the video
Here is are two tracks from a live show. "Long Distance Call" and "Rally"
Posted by Clyde at 4:40 PM No comments: 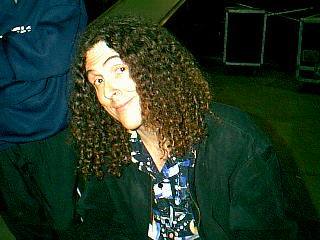 This is Weird Al's take on James Blunt overplayed, "You're Beautiful" Its called "You're Pitiful." HILARIOUS DOWNLOAD HERE
Posted by Clyde at 1:39 PM No comments: 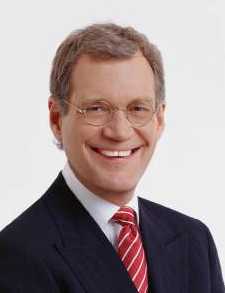 My Morning Jacket will be on Letterman tonight appearing with the Boston Pops Orchestra. Check it out.
Posted by Clyde at 2:56 PM No comments:

Check out Cold War Kids. They sound similar to the Black Keys, but honestly I like them better. They have a little fuller sound. After many blogs have been talking about them, I finally broke down and checked them out. All of the songs I've heard are very solid. Here is my favorite. Hang Me Up to Dry - (Click and Scroll Down)
Posted by Clyde at 9:45 PM No comments: 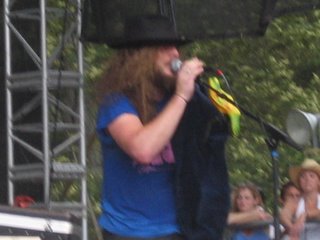 In my opinion, the best band right now is My Morning Jacket. Their powerful live shows mixed with their ridiculous talent creates a perfect band. Here are some live covers, and B-Sides.